Chimney Caps and Crowns: What You Need to Know to Prevent Chimney Damage

When it comes to regular home maintenance, chimneys are often neglected. Even when people do think to pay attention to their chimneys, they usually think of sweeping out the interiors and may forget that the outside masonry is constantly exposed to the elements, opening it to the possibility of damage.

When chimneys are exposed to the elements and subjected to freeze-thaw cycles, water can penetrate the masonry materials and accelerate the chimney’s deterioration.  Not addressing the deterioration of a chimney can eventually result in costly repairs or even hazardous circumstances.

Damage to a chimney from water penetration can include cracked flue liners, eroded mortar joints, rusted damper parts, stained brick, wall and ceiling water damage, rotten wood, and much more.  There are 25,000 chimney fires every year in the U.S., mostly due to chimneys that are not well maintained.

How Chimney Crowns and Caps Protect Chimneys From Damage

One of the best ways to protect your 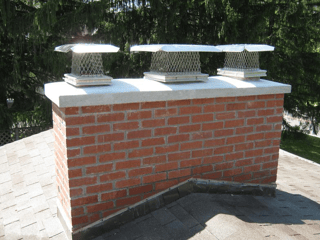 chimney from water damage is by making sure there is a properly installed chimney cap and chimney crown on the top of your chimney.

The chimney crown (also called a chimney wash) is the top component of a chimney.  It covers the top of the chimney from the flue liner to the edge.  Often masons will use leftover mortar to make the chimney crown.  Mortar, however, is not the best material to make a chimney crown with, because mortar crowns will often crack due to shrinkage, enabling water to penetrate the chimney beneath.  The most highly recommended material for properly built chimney crowns is Portland based cement.

Characteristics of an effective chimney crown: